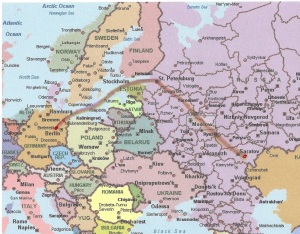 This week I have spent some time reviewing the information on my husbands family that emigrated from the German colonies along the Volga river in Russia. Due to traveling I have fallen behind in my blogging with Amy Johnson Crows themes – 52 Ancestors.
Last December during my research trip to Salt Lake City. I collected the information from three different census that occurred in the Saratov region of Russia the Bender’s and Schneider’s were from.

This is the only Friedrich Schneider in this census.

Since Katharina is listed below Georg Friedrich we can assume that she is his wife. And those below them their children. Which includes Maria Elisabeth (12), Katharina (9), Friedrich and Johann Georg (4). Three more bothers in the Johann Jakob Schneider household are also listed with their families.

Where Georg and Johann’s middle names inadvertently switched. The ages are not quite right according to the 1857 census. But the family names are rather consistent otherwise.

Stepping back to the earlier census taken soon after the colony was settled, there are two (2) Schneider families in this earliest census. the Dewald Schneider (37) w/ wife Anna Maria (28) and son Johann Adam (13). Johann Adam Schneider is found in the 1834 census having died in 1823 and counted in the 1816 census as being 63. That is so close that we can discount Dewald as our colonist. That leaves Nicolaus Schneider (38), Lutheran, coming from Brandenburg, Satzwedel with his wife Maria Katharina son Johann Friedrich (1/2) and stepson Johann Heinrich (4).

This same process can be used to trace other lines from Kratzke.

In reviewing the information on the family from Wilma and John Akers the listing of birth places  are all over the place, but the information states that Friedrich Schneider and Maria Katharina (Schrader) were married in Kratzke Russia in 1871. Therefore I am going with this lineage until I find out otherwise.

52 Ancestors – Wedding of Dorothy and LLoyd

Comments on: "52 Ancestors – Discovering the original Schneider emigrant to Russia" (1)

What do you think? Cancel reply

the genealogy girl
The Bend chiropractic at Whitefish

Tales of a Family