My challenge for this month was to review the Batson Family Line.
Last week I outlined the process I plan to use as I continue this year’s challenge to review one Family Line each month. At the start of each month I will pull off the shelf the next surname binder. So even though I might not have completed reviewing the files for the Batson Family on the first of the month I’m moving on.
The goal is to get my files in order and to outline what tasks are yet needed on each line.
Carrie or Caroline Batson is where the Batson Family begins, Carrie had three sisters and six brothers. Emma, the eldest, was born about 1846 and Edgar E., the youngest, was born in 1894. Alfred the oldest boy was born about 1847 which means he was of age to have served during the Civil War.  There are several possibilities for him in the civil war, but none are obviously him. I do not have Alfred in the 1870 US Federal Census. But I have found a county marriage record for him and other US Federal Census records. In 1880 Alfred is married and living in Clark Co., Illinois, and working as a potter. I am certain this is John R.’s son and Carrie’s brother. John R. Batson was a lifelong potter and William L., Alfred’s bother, is shown also working as a potter in the 1870 census, while still living at home. In the 1900 US Census Alfred was then living in Sullivan Co. Indiana, but is now listed as a coal miner. Curious as to  what happened. I have discovered that in the 1890 a huge influx of immigrants into this country were coming from areas renown for their pottery, and it wasn’t until around 1910 that the tariff on imported pottery was lifted causing an impact on this country’s pottery industry.

Trying to put some facts and substance to the other siblings  will take more research. I’ve only been able to find the deaths of 8 of the 10 children of John R. and Sarah J. (Dick) Batson.

I have been able to document John Batson fairly extensively. Now his parents are noted as William Batson and Catherine Aldrage. William born about 1799 is also shown as a potter in the 1850 US Census. We have only 4 children born to William.  John, our 2x great grandfather born about 1823 in Virginia (later noted as W. Virginia), William born about 1827 in Va, also listed as a potter in the 1850 US Census, Charles born about 1833 in Ohio and Mary born about 1835 in Ohio. I have found a marriage record in Ohio of William Batson to Catherine Aldrage on 29 August 1840, Therefore Catherine is more than likely not John nor Williams mother also probably not Charles or Mary’s either. Another task, who is John’s mother?

In the 1850 Census we see William and Catherine with a Charles 17 also a potter and Mary 16.

William and Catherine leave Ohio and move out to Leavenworth County, Kansas where the are enumerated in the 1860 US Federal Census in Easton. 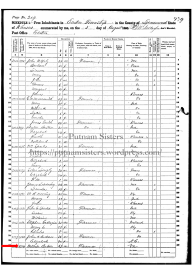 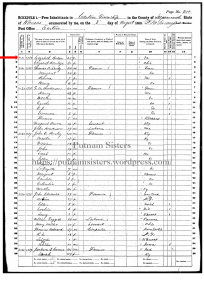 As you can see Catherine is mislabeled as Elizabeth (possibly a middle name) and there is an Elizabeth Aldridge. Questions to be answered: Is Aldridge, Catherine’s maiden name or from an earlier marriage? What relationship is there to Elizabeth Aldridge?

Elizabeth is 30 in this census making her birth about 1830, That was prior to when Catherine married William Batson. So if she is a daughter of Catherine why isn’t she in the 1850 census.

In the 1870 US Federal Census Elizabeth Aldridge is now listed as either 25 or 35 not aging as the rest of us. She and Catherine are both shown as unable to write. I did find in the Bethel Cemetery, Springdale, Leavenworth County, Kansas, William Batson and Catherine Batson are buried there, also there is an Elizabeth Aldridge, it gives her date of birth on the stone as 10 Feb. 1823 and her death date as 20 Feb. 1893.

According to the photos on find a grave, William Batson death is listed as 7 April 1872  and Catherine death was 5 months earlier on 16 October 1871.

We need to find the death record in Kansas for William to find who his birth parents were. Also the Death certificate for Catherine may solve the question is Aldrage or Aldridge her maiden name. Of course if you have any information on this family line I would love to hear from you.

Next weeks it is the Booth Family line.

If you have enjoyed this weeks blog please leave a comment below.

This past week Amy Johnson Crow of 52 Ancestors challenged us to write about Love. Well we do have a collateral line named “Loveren” but that’s a stretch. So an ancestor I overlooked in last years 52 Ancestors is Carrie Batson. Carrie is one of my paternal great grandmothers. She is my grandma Gay’s (Etta’s) mother. While I knew her husband, ‘Grampy’ I never knew her.
Carrie (Caroline) was born 17 January 1866 in Mt. Sterling, Ohio to John R. and Sarah (Dick) Batson. 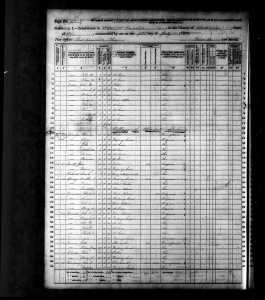 In the 1870 US census (click on image to enlarge) we find a Catherine (3 years old) listed in the John R. Batson (47 years of age) family in Hopewell township, Muskingum county Ohio, a Potter, born in Virginia. Her mother is Sarah J, (40 years) born in Ohio. Also in the household is William L. (18 years) also a Potter born in Ohio, Agnes A. (16) helps mother, born in Ohio, John M. (13)  born in Ohio, Florence R. (11) born in Ohio, and Charles H. (6) born in Ohio. This is probably where I get my love of pottery from. This family is the last entry before the listing for the Village of Mount Sterling.

In the 1880 US census John R. and Sarah J Batson are again in the Hopewell township in Muskingum county Ohio. John is now 57 and still working as a potter. Here we see that he and both of his parents were born in Virginia. Sarah is now 50 and again shown born in Ohio while both of her parents are listed as being born in New York state. Florence R. their daughter is 20 years old and still at home. Their son Charles is 18, Carrie is 14, and a new younger brother to Carrie is Edgar E. who is 10 years of age. 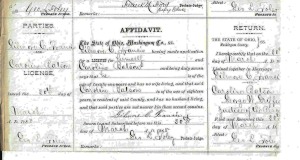 In 1888 Carrie Batson married Gilmore C. Francis. They marry in Zanesville, Muskingum, Ohio on 30 March by the Justice of the Peace George W. Griffen. Gilmore was born and raised in California. How did he meet, let alone marry Carrie? My sister Madeleine’s theory is that Gilmore was unable to find a wife from those that knew him in California and it’s her idea that through his fathers connections to friends and family still living in Ohio a wife for Gilmore was found. Gilmore was 23 and Carrie was 22 when they married. That is why Madeleine and I refer to Carrie as a possible ‘mail order bride?‘

The 1900 US census we find Gilmore and Carrie in Tulare county out in Orosi (about 15 miles north of Visalia) California. Gilmore is 37, a farmer renting the home they are living in. Carrie is shown as Sarah C. 34 years of age and having given birth to 2 children both of which are still living. Etta is now 10 and Gracie G. is 8 years of age and they are both in school. Carries father died in 1900. 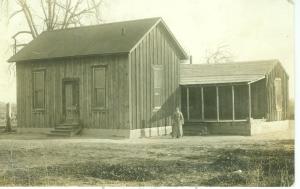 In the 1910 census the family is still living in Orosi. My Grandmother “Gay” talked about growing up on the Elliott Ranch. Hey David, do you know where the Elliott Ranch was? I had thought it was south of Visalia near Elderwood.

By the 1910 Census Carrie’s daughter Etta (my grandma ‘Gay”) had married Ira B. Putnam and moved to his ranch west of Visalia California. So the Family consisted of Gilmore C. now 45 years old Farming on a farm as an employee. Carrie is now 43 and it shows 2 live births and 2 yet living. Carrie and Gil were lucky they did not lose any children early.  Grace is now 19.

In 1915 Carrie’s mother dies in Ohio. So at 49 both of her parents are gone and probably any connections at home in Ohio are limited.

In 1920 US Census we find that both of Carrie’s daughters are now married. Gracie married Lark Jones in 1912. Gil and Carrie are now living in Visalia.

In 1930 US Census they were not found but they are in the Visalia city Directory in 1934.

Carrie is buried in the Visalia Cemetery.

How do you think Gilmore and Carrie met? Was it a love match or an arranged marriage?

My paternal great grandfather was Gilmore Francis. Born 11 November 1864, Gilmore was the second son of George Wahington and Clementine (Shipp) Francis, in Tulare County, California. My grandmother talked about her family coming west in a covered wagon from Ohio. It must have been sometime between the 1850 Census and the marriage of George Francis to Clementine Shipp. George Washington Francis is not in the 1860 census in Hopewell, Ohio nor in Visalia, California. Maybe they were in transit during the census. From the 1900 US Census we get the marriage year as 1860 when Clementine is only 13. Yet in the 1860 census in Visalia we find Clementine Shipp with her parents and siblings in Visalia, California. I thought the Francis’ should be close if George W. Francis and Clementine get married later that year. But I have not found them.

In the 1970 Census we find Gilmore (6), born in California. His father George  (39),  raising stock, with a real estate valued at $1,000 and a personal property value of $4,000. He is shown born in Ohio. Gilmore’s mother Clementine is listed as 23 years of age. Clementine was shown as born in Louisiana. Gilmore’s older brother William who had been born in 1861 had already died in 1868.

In 1888 Gilmore marries Carrie Batson of Zanesville Ohio. We have lots of questions about how this marriage came about. While the Francis family was from this area Gilmore was born in California. The transcontinental railroad is completed in 1869. So travel would have been easier, but still….

Remember there is no 1890 US census. So we look for state censuses and voter registrations. For Voter registration we find Gilmore in the 1886, 1890, and 1892 records in Venice township, rural Visalia, Tulare County, California. In the 1892 Voter register there is a physical description. Height is listed as 5′ 6 1/2″, complexion light, eyes blue and hair brown.

1920 we find Gilmore and Carrie alone, Grace has married Larkin Jones (1912). Gilmore is now listed as 55 years old still farming and owning his home free and clear.  Carrie (53) and she lists both parents born in Ohio.

Somehow they are not in the 1930 US Census. But we see them in the Visalia Directory in 1934. Carrie dies 12 August 1937 and is buried in the Visalia cemetery. 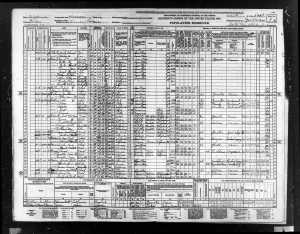 In the 1940 US Census, Gilmore C. Francis (75) is a boarder living in the home of an Emily Dillon (78). Gilmore does not list any occupation.

In the 1955 City Directory for Visalia, Gilmore C. Francis is listed in Dinuba.

Gilmore dies on 27 January 1955. Madeleine and I were told we were to young to go to his funeral.

What I recall about “Gramps”  was that he was a small man without any teeth. I remember one time at Gay’s (my grandmother’s) house watching him eat peas off a table knife. I knew if I ever tried that I would be “in big trouble”. I know he stayed with my grandmother Gay on the ranch a lot. He was at family functions, but I can not find any good pictures of him.