I am writing this week about Gabriel Westfall who was born about 1828 to Elizabeth (Clark) and John Westfall. He is the brother to our 2x great grandmother (on the maternal side), Jane Westfall. Family Letters to John Lyle Dougherty during the Civil War (our great grandfather) gave news to John about his family back in Pennsylvania, and as I got to know them through these letters, I thought you might like to know about them also.
In the 1850 census we have Gabriel at 22 living in his fathers household with his brothers William (31 years old), Solomon (26), John (17), sisters Maria (20), Mary C. (Kate?) (14) and Amelia A. (sister-in-law, Williams wife) Westfall (24) and 10 month old baby Franklin son of William and Amelia. Gabriel is listed as a student. Gabriel’s mother had died 11 years earlier in 1839 ( Source: hand written family tree from Milford Historical Society).

To Washington with the intention of going

In the Army, if he could not get the

Chaplanry. He was advised while there not

To go in the army a tall so he said he

Yielded to their advice and paid $300

The file below shows his draft registration. He is listed as 35, occupation clergyman, and single.

Again the 1870 US census I have found no record of Gabriel. Yet in the records of deeds for Wayne Co. Pennsylvania we find a parcel of land  listed as Owned by Reverend G. Westfall  (1873). This is when I presume he married and settled down with wife Sarah.

Jane E. Westfall was the fourth child of Elizabeth Clark and John Westfall of Milford, Pike County, Pennsylvania. Jane is listed in her son’s biography as being born in 1820 but the 1900 US census list date of Birth as Feb. 1826 and her death record in Milford 1901 lists her age as 75, also making her birth year 1826.

Jane was one of seven children known to have been born to John & Elizabeth Westfall. From family letters, many written by Jane to her oldest son (John) , we know of the various family members locations or activities when the letters were posted. They are great clues about where to look for these family members.
Jane tells her son in one letter that they had not heard from Gabriel and Maria (one of Jane’s brothers and a sister) since their arrival in San Francisco. An earlier letter had spoken of Gabriel going down to Washington to enlist in the Army as a Chaplin. These little snippets have been a great aid in finding family members.

Jane E. Westfall marries William Lyle Dougherty prior to 1842. They had five boys, John, Clark, William , Solomon, and Alva. I Reported on W.L. Dougherty in my blog posting “My Brick Wall”, earlier. After William drops out of the picture we find Jane married to Fernando Chamberlin still in Pike County, Pennsylvania, with Warren (son of Fernando from a previous marriage?) and Malvina, Jane and Fernando’s daughter. 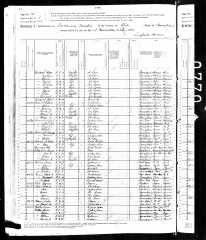 In a letter that John L. ( Jane’s eldest son) wrote to his mother, he asks if the boys are calling Chamberlin, father, yet. We can assume that would be the younger boys Solomon and Alva. Her other two boys Clark and William have by this time joined the war, Clark the Confederate and William the Union.

Jane’s second husband in the 1880 census is shown as 56 years old. With out the 1890 census it is harder to determine when Fernando dies, but the 1900 US Census finds Jane living with her step-son Warren and daughter Malvina. 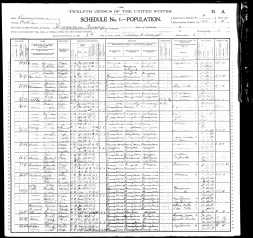 The last and final piece for Jane E. Westfall shows the death record for Lackawaxen, Pike Co., Pennsylvania. It shows her place of internment Rowland. In 1993 we visited the area and saw where she was buried alongside her daughter Malvina.