We all have them our brick walls, and this one has been stumping us (my sister & I) for decades.

William Lyle was our maternal 2x great grandfather.
In the 1850 US census Wm  L. Dougherty age 36 can be found in Pike county, Pennsylvania.

We have searched for death records and divorce records to no avail. On our family history research trip to Pennsylvania in 1994  I visited the court-house in Milford, unfortunately  in Pike County Pennsylvania they have very few records. We visited cemeteries and we were fortunate to find Jane E.’s grave in a small church cemetery along with her daughter Malvina from a later marriage but alas no William.

While in Pennsylvania we visited the historical archives at the Library in Port Jarvis.  They had on file a handwritten  Westfall family tree. 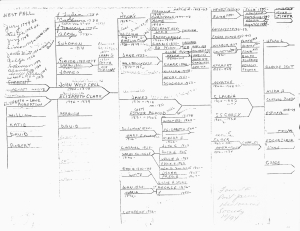 Well that is a clue but no answer.

In 2003 I heard from a 3x great granddaughter of William L. Dougherty  whom I had been unaware of and she was able to shed quite a bit of light on Williams son, Clark but nothing further on William. She contacted me through my Family History web site

I have lost contact with her and would love to hear from her again. Kim, we need to share and get caught-up.

In looking for Wm. L. Dougherty I have searched Naturalization papers in Pennsylvania, again too many William Doughertys. I have searched boat passenger lists and have a possibility but without an arrival date I can not verify.

I would like to find a record of his death.  I do see where on the Internet on a Public Ancestry  Family Tree  they attached a death date from a William Dougherty who died (drowned in a river) in Philadelphia, about the right time that my William goes missing in the 1860 census. If that is our William what was he doing in Philadelphia and what proof do they have that he is Jane’s husband?

I would like to know when he arrived in this country. In looking at the Census records for his father-in -law I found that he (John Westfall) employed many Irish laborers. Was this how William meet and married Jane? Were any of the Irish working for his father-in-law in the 1850 census on the same boat with William when he came to the United States? We have been trying this line of search but have not found any connection.

I have looked for the marriage of Jane to her second husband ( Ferdinand Chamberlin) but Pike County marriage records only go back to the early 1900’s.

I am stumped. My sister and I also tried to jump the pond but without that arrival date and port of departure the time frame of connecting William Dougherty to the hundreds of Doughertys in Londonderry has been disappointing.

I have tried various forms of the spelling for Dougherty again no luck. Any Ideas?