While recently  in Salt Lake City at the Family History Library, I made a quick sojourn into the Kornmeyer family line. If you have been reading my blog you may remember that the Kornmeyers are my husbands paternal line. The first of this line to arrive in the United States was Martin Kornmeyer and his family in October 1850. They had left from the Grandduchy of Baden.as noted in the “Katholisch – Böhringen, Konstanx, Baden” (Catholic Church records)in 1848.

Located in the southern most reaches of Baden,  Böhringen may be found just north west of Konstanz, approximately 10 miles.

Leading west out of Lake Constance is the Rhine River. Munich is northeast of Konstanz.

During my research I found record in “Katholisch – Böhringen, Konstanz, Baden” recording the marriage record for Josephus Kornmeyer and Cecelia Froehlin on 05 May 1735. Then the following children entrants can be found subsequently  by year of the christening.

Many entrants in the Catholic Parish records after 1800 show the parents of the bride and groom, this is one way to trace the family line back but this one prior to the 1800 only records the couple and the date. Finding Josephus  and Celcelia parent’s was to take a little more sleuthing.

Which couple if either are the parents of our Josephus Kornmeyer? That is a question to be solved another day.

The following rather poor copy is Josephus and Cecelia’s son Gregorius’s christening in Böhringen, 28 February 1743.

In the records of Böhringen, dated from 1818-1885 I have seen the family pages for Phillip  and his brother Fidel.

She and Pius have the following:

What I find interesting is that Berndorf is 480km from Gottmadingen Konstanz Baden. and you see by the map above that Gottmadingen is only 7 miles from Böhringen.

So question for the relatives is “did Anna Maria and her husband start out with Martin and his family for America?”

What about the 1848 Baden Revolution?

Joseph Kornmeyer (2x great grandfather on my husbands paternal line) was born Dec. 7, 1840 in Baden Germany and christened in Boehringen, on Aug 27, 1840. His parents were Martin and Maria Ursula (Uhl) Kornmeyer. Joseph was part of generations of Kornmeyers that are listed in the Catholic Church there in Boehringen.

This map shows the town circled in red.

Joseph was 8 in 1848 when the parish records state that the family left for America. His mother had either just died or died on the trip to Rotterdam, where they boarded the Ship Jane E. Williams, for an average 3 month voyage to New York, arriving on October 7, 1850. Wow two years to go from Baden Germany to New York. What hardships did they have on their travels? Were the docks swarming with travelers for the gold fields in California? Was there a lot of illness around them?  I would think that was quite the adventure for a 10 year old boy. I wonder if he was sorry they were leaving everything familiar for the hope of a better life in America?  From my own experience of moving when I was ten, I was quite angry  for several years, and we only moved about 200 miles.

In the 1860 Census for Boonville, New York we find Joseph (19) listed as a farmer the same as his father and the other members of the family. His father has married Rosa Jackle and  Joseph has a new sister listed as Amelia (11) born in New York and a new brother John (5) born in New York. The age for Amelia is probably off as is Phillip’s age which is also listed as 11 and he should be 16 while I would hazard a guess that Amelia is barely 10.

In the 1870 census Joseph would be 30. But I have been unable to locate him He married Josephine Isabella Good  in 1868.

They had three children only one lived to raise a family of their own. Fredrick Joseph Kornmeyer was born July 7, 1869 in Hawkinsville, New York, Mary Louisa was born December 26  1871 and died a little over 4 mos. later on May 2, 1872. 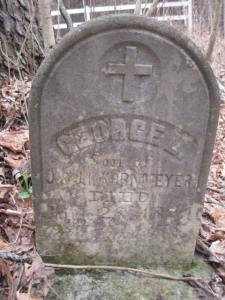