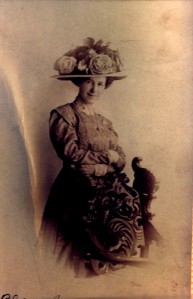 Auntie Blanche as she liked us to call her was born August 12, 1888 in Three Rivers, California to Ida Mae (Clough) and Joseph Fletcher Putnam. She was the fourth child born to Joe and Ida and sister to my Grandpa Ike. I was very confused growing up about exactly who our great aunts and uncles were. But when I was in high school Mom, Dave, Madeleine and I made a trip to Los Angeles and visited out Aunt Blanche. On that trip she helped Madeleine make a family tree.

As you can see it was a little confusing.  Joseph Putnam and Mary Fletcher were Blanche’s grandparents they had lived in Clements California.  Blanche told us the story about them coming around the horn to California in 1859 or 1860. She talked about a piano that they had shipped from back east that also made that trip. So her grandparents had 7 children according to Aunt Blanche: Lucy, Emma, Joseph Fletcher ( her father), Will, Ed, Maude, and Jenny. (In actuality they had 9). So her father Joseph Fletcher was married  once before,and Aunt Blanche did not know her name nor did she indicate she knew what happened to her, but she had two half sisters from that marriage, Alice and Grace. Her mother Ida Mae was also married previously to a Bryant and she had 3 more half sibling’s from that marriage Eli, Maude and Ed. When we finally started doing this genealogy thing. Aunt Blanche had already passed away and she was the last of that generation that we were in contact with. In the early years I discovered that Joseph Putnam’s first wife was  Fanny Stewart and she left after Alice was born presumably to visit her family in Kanas. She took the baby (Alice) with her and left the toddler (Grace) with her husband. She never returned and Joseph filed for a divorce claiming desertion. With a small child to take care of he married Ida Mae, who already had three children. Their first child (from Auntie Blanches family tree) was Arthur and he died in infancy, then there was grandpa Ike (Ira Blossom), Lena and then Blanche. In 1891 Joseph F. Putnam paid cash for a section of land in Tulare County California (Parcel 018s, range 029E, Section 6). I assume that is about when the family moves to the ranch in Visalia. I wish there was a 1890 census to see how many were in the household when Blanche was very young. The first census we have for Blanche is the 1900 US census which shows Joseph (46) living in Santa Clara California, alone with the three youngest children Ira B. (17), Lena (14), and Blanche (11). Blanche is still in school and both her father and her brother are listed as day laborers.

I have found Ida Mae (Blanche’s mother) in the 1900 US Census in Fresno the wife of a Charles B. Peters (30). Listed is Ida M. (45) wife, and Clarence E. Bryant (27) stepson to head of household. Charles and Ida are listed as being married 3 years. So Blanche’s mother had left and remarried by 1897, Blanche would have been 8 or 9. On Oct. 16, 1907 Blanche marries a Nelson O. Cook in Visalia, California. Nelson is 29 and Blanche is 19. When we found this record in the Tulare County records office neither Madeleine or I had been aware that Aunt Blanche had been married previously.

In the 1910 US Census we find Mrs. Blanche Cook (21) widow in the household of John Corsen who is married to her half sister Alice. Also in the household is her sister Lena, and a boarder. Nelson  Cook had died 29, June 1909 in Tulare Co., California.

In 1912 Blanche marries Roy H. Berggren. In the 1920 US Census we find Blanche Berggren (31) wife of Roy H. (31) born in Illinois, both his parents born in Sweden and he is a plant manager for the Telephone Co. Do you remember that old black and gold phone that sat on her desk, an antique in 1960 when we visited her? In the 1930 census Roy H. Berggren (40) married at age 24 listed as a Engineer with the telephone company and Blanche A. (41). They are living on North Benton Way in Los Angeles.

I remember every Christmas, Madeleine and I would get the most beautifully wrapped gifts from the May Co. in Los Angeles that Auntie Blanche had sent to us. When we graduated high school we each got to pick out our “hope chest’ and she would pay for it. Mine is still one of my favorite pieces of furniture. Aunt Blanche would telephone her sister Lena on Friday nights in the 1950’s and you could hear the live crowd from the Saturday night fights in the background. She lived less then a block from the ROK studios in Los Angeles. I stayed with her for a couple of days in the summer of 1964. She took the bus everywhere. She had no car. But another grand nephew (grandson of Alice ‘Eli’ Bryant) was living in West Covina and would have her out for dinner on weekends. She lived in a beautiful old apartment building that still had an Ice Box in it. 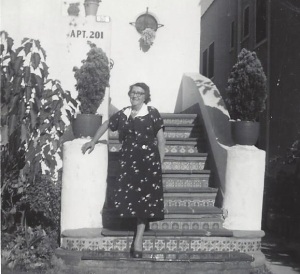